With support from the Poul Due Jensen Foundation, PlanBørnefonden was able to act quickly when the COVID-19 pandemic hit. It has helped to create calm and save lives among some of the world's most vulnerable people in Ethiopia's refugee camps, where hundreds of thousands have benefited from the efforts.
Share:
Print

Many hundreds of thousands of people live in Ethiopia’s refugee camps. A lot of them have fled the civil war in neighboring South Sudan. These are people who have left everything they own. In the camps where they live, access to water and sanitation is already a challenge, just as it is practically impossible to keep a distance due to the high population density. When COVID-19 suddenly made even greater demands on just those things, there was a real risk that panic and chaos could spread among the many vulnerable residents.

"Our long-term, strategic partnership with the Poul Due Jensen Foundation enabled us to quickly help some of the most vulnerable people in Ethiopia."
Bjarke Skødt Fabricius, project manager, PlanBørnefonden

Thanks to a solid collaboration and great flexibility from the Poul Due Jensen Foundation, PlanBørnefonden was able to make a quick effort in nine camps in two different regions and two local communities with many internally displaced people in a third region, so large sections of the population were informed about how they had to protect themselves against the infection, and had the necessary access to water, soap and other sanitary products when the infection hit the refugee camps.

“Our long-term, strategic partnership with the Poul Due Jensen Foundation enabled us to quickly help some of the most vulnerable people in Ethiopia. The project implementation went well, and we received a lot of grateful feedback from refugees and a very cooperative government,” explains Bjarke Skødt Fabricius, who is responsible for the project at PlanBørnefonden.

The health centers in the refugee camps are crucial to the health of the population. They were already challenged by the fact that the water supply to the camps is often unstable, which became an even bigger problem when COVID-19 suddenly made very high demands on access to clean water. The installation of 20 large water tanks of 5000 liters and extra water supplies has made a huge difference in solving the issues according to Bjarke Skødt Fabricius.

“The pandemic has led to an increased need for clean water among the population. The large tanks, where four people can tap water at once, have helped reduce the queues for water. And the population has been able to keep the necessary distance, while at the same time being able to get the amount of water they need. In addition to access to water and distribution of basic emergency aid such as hygiene kits, good hygiene practices have also been reported. And we see that the population takes in the information and routines and makes sure that hands are also washed in, for example, markets and other places where many people gather.” 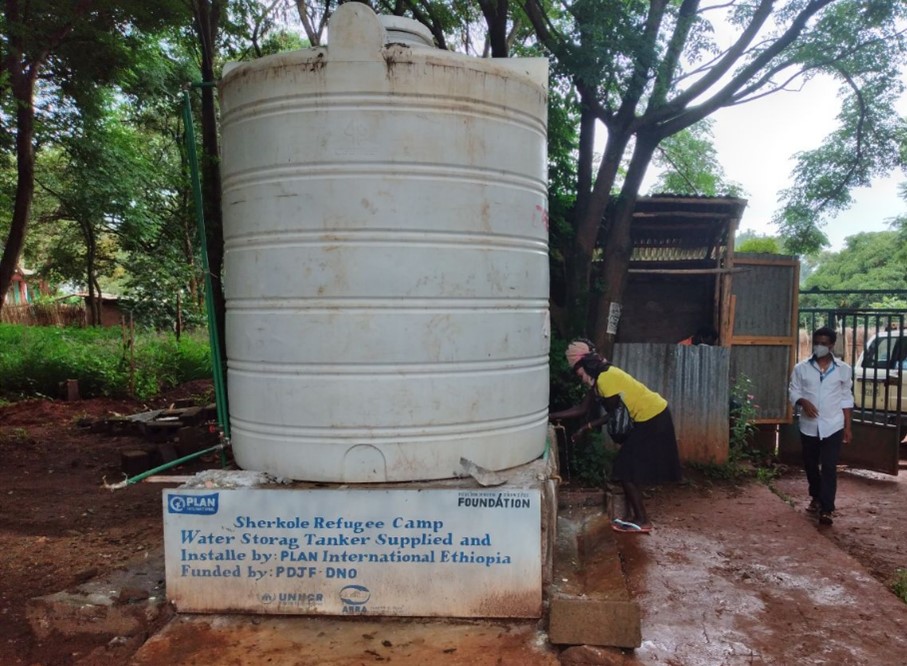 One of the water tanks has been set up in the Sherkole refugee camp. Photo: PlanBørnefonden/Plan International

One of the water tanks has been set up in the Sherkole refugee camp where Itona Loba lives. She has fled to Ethiopia from South Sudan with her children and they have also benefited from the second part of the effort, where the population has been given hygiene kits including products such as soap and menstrual pads as well as buckets and cans. The lockdown and the high demand for the products mean that Itona could not have protected herself and her children against the pandemic without the help of PlanBørnefonden and the Poul Due Jensen Foundation.

“It has been very difficult to get hold of soap and other hygiene products here in the refugee camp during the COVID-19 pandemic. We also do not have the money to buy them in the city, where prices have risen due to the high demand. But thanks to the things we have been given, we can wash our hands and maintain good, personal hygiene.”

Itona Loba and her children are part of the 388,620 refugees and internally displaced persons in Ethiopia who have benefited from the effort. Photo: PlanBørnefonden/Plan International