Water and data flow in Togo

After a succesful installation mission to Togo's Plateaux Region, the two villages of Bouré and Iko-Akpa now enjoy improved access to drinking water. The Poul Due Jensen Foundation and its partners will be able to harvest real-time data on the performance of the pilot system which combines solar panels, saltwater batteries and an SQ Flex submersible pump.
Share:
Print

End of May was absolutely last chance to go to Togo and install the Foundation’s battery pilot project. As the rainy season was slowly moving north towards the Plateaux Region from the coastal area in the south, we were lucky that the roads were still dry and we were able to get the equipment to the final destinations of Bouré and Iko-Akpa.

The Foundation’s new solar/battery pilot project was installed succesfully in both villages. In the video below you can get an impression of the installation process which lasted two days and involved a lot of people: Grundfos technicians Thomas and Nikolaj, Helene from PlanBørnefonden in Denmark, local Plan International staff, regional water authority staff and of course the contractors of ECM who had been building the infrastructure in collaboration with the community.

Battery pilot – installation May 2019 from Grundfos Foundation | PDJF on Vimeo.

You will hear several languages spoken in the video. Besides English and Danish, French and local dialects also appear.

In Togo, there are around 10,000 villages with less than 1,500 inhabitants and these villages are primarily served with handpumps today. The handpumps are installed and supervised by the local water authorities who also demand that each village elects a water committee (called AUSEPA) and makes sure that each household pays for the water. This also means that the local water authorities are an important player: they are actively involved in all of our water projects in the Plateaux region. 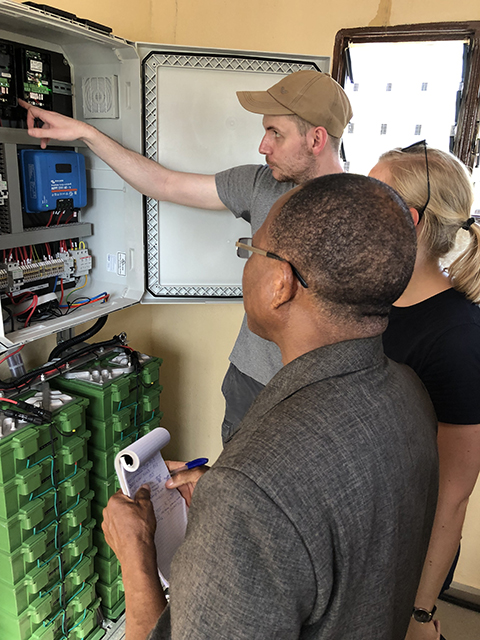 Grundfos Technician Nikolaj Vorre gives a guided tour of the control cabinet to a local water authority representative. The green boxes below are the saltwater batteries which are charged by solar panels. Photo: Thomas Christensen

Data will provide facts about consumption and performance

The new solar/battery systems will not only provide safe water to the villagers but more importantly make real-time data available via Grundfos Remote Management which will allow us to both monitor and evaluate the performance of the battery system in the tropical climate but also measure the environmental impact, especially with regards to the groundwater level. With the data, we would like to get bulletproof facts in order to propose new methods to provide better access to safe water in small last-mile communities. 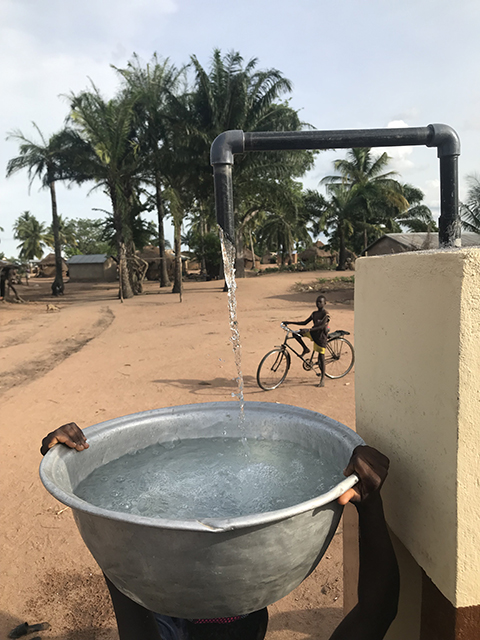 A ‘bassine’ contains about 30 litres of water. At the new tap stand in Bouré it fills up in about 4 minutes. Photo: Poul Due Jensen Foundation