In India, the Foundation works with Sunlit Future and local partners in several regions. One of them is Maharashtra, where the geology and deforestation has created very special difficulties for the local population.
Share:
Print
Jawhar, Mokhada, and Vikramgad are three blocks in the district of Palghar, Maharashtra which is a part of the Konkan range. These areas are situated on the west side of the Western Ghats and the east side of the Arabian sea. The region consists of small hills, hillocks and mostly uneven lands made of basalt rocks. During the summers the temperature reaches above 40c in these areas. 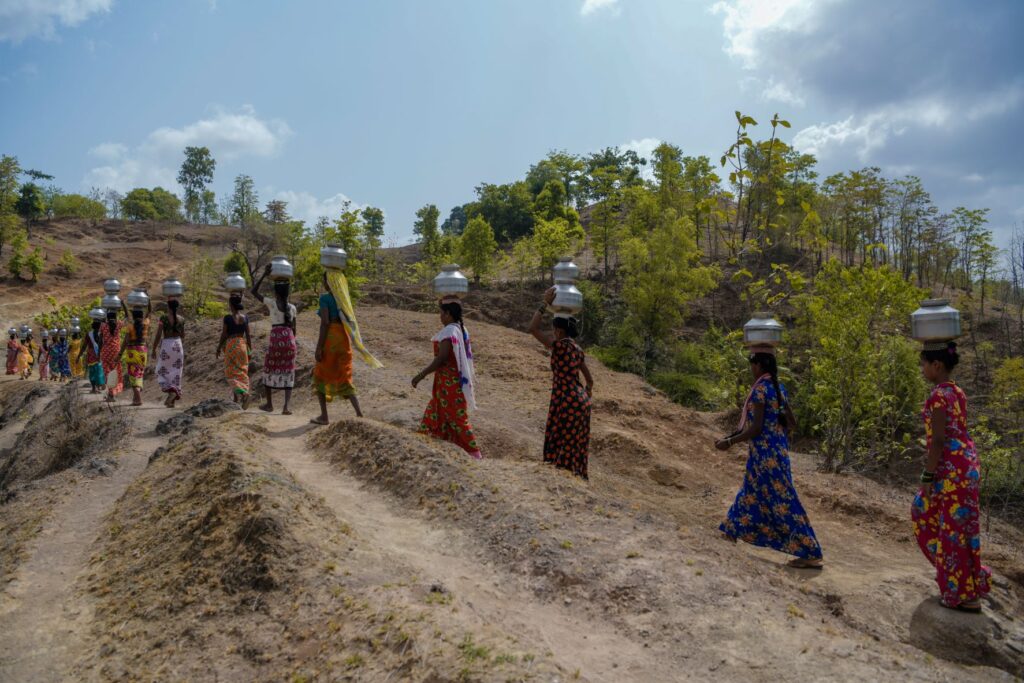 When villagers go to collect water, they have to climb kilometres, sometimes at an elevation difference of about 200ft – 400ft to collect the water and return home carrying two to three pitchers. Photo: Avijit Ghosh

Before the deforestation, when the area used to have dense forest and agricultural activities, rainwater recharged the groundwater pockets as the soil was friendlier to holding waters. During monsoons, rainwater naturally slopes down to plain lands.
"The region receives around 2458mm rainfall throughout the year, mostly during the monsoon, but in summers all water sources turn dry. There are a few reasons for that but the most important is deforestation. "
Dr. Umesh S Mundlye, Director of Oikos Water Management Pvt

Lately, soil erosion has increased a lot and therefore during the rain it can’t recharge the underground water storage as soil depth is required to do that. In the video below, Dr. Umesh explains how he works to prevent the water loss:

As the area consists of hills and valleys made of basalt rock, there are no water tables. Instead, in these areas, one can find water pockets which are usually underground aquifers where water moves in between rocks and soils throughout the year when it comes down from the hills to plain land.

To deal with this situation of water sources getting dried up, one needs to hold the water on the hill slope throughout the year so that it recharges and does not flow away.

"We cannot go with a common approach everywhere. One idea succeeding somewhere doesn’t mean it will succeed everywhere. We have to think site-specific. "
Dr. Umesh S Mundlye, Director of Oikos Water Management Pvt

The common approach taken to do this is by making check dams and RCC bunds which not only costs a lot of money to create water retention areas above the surface but also leads to evaporation losses and someone has to give his/her land to build that structure. In the words of Dr Umesh S. Mundlye, 50, “We cannot go with a common approach everywhere. One idea succeeding somewhere doesn’t mean it will succeed everywhere. We have to think site-specific”.

The common approach to hold the water on the hill is by making check dams and RCC bunds. Photo: Avijit Ghosh

Dr Umesh, who is working for decades with the local NGO Pragati Pratishthan in this region, has adopted the method of subsurface bunding as a response to this problem in a few sites to help prevent the wells from drying up. In this case, they first visit the site and identify a location downstream of the well which is a common source of water for the village. They dig a trench in a selected spot and make retaining wall underground which acts as bunds to retain the water flow within. In this method, they create an artificial aquifer for the backup of the well. So, throughout the year, after rains when water flow from under the surface through rocks and soils, bunds will slow down that water flow and that will recharge this artificial aquifer and which in turn recharges the well and prevents it from drying. Since this structure holds the water underground the loss through evaporation becomes negligible and no one has to give up their land.

“It’s a win-win situation for all,” Dr Umesh says.

The common approach to hold the water on the hill is by making check dams and RCC bunds. Photo: Avijit Ghosh

Together with our partners, we bring access to water to the world's poorest.
See all programmes