The districts of Memba and Mossuril in Nampula province, north-eastern Mozambique, lie on the coast of the Mozambique Channel. Seven out of ten people in these two districts lack access to safe water.

Today, the communities draw water from polluted rivers up to three hours’ walk away that are shared with livestock. This hinders the development of communities, as water and sanitation underpins every aspect of development – from health to education, infant survival and development to economic productivity, gender equality and much more.

The water project is partly funded by the Poul Due Jensen Foundation through a 3m DKK grant. The implementation is secured by the Foundation’s strategic partner, WaterAid. 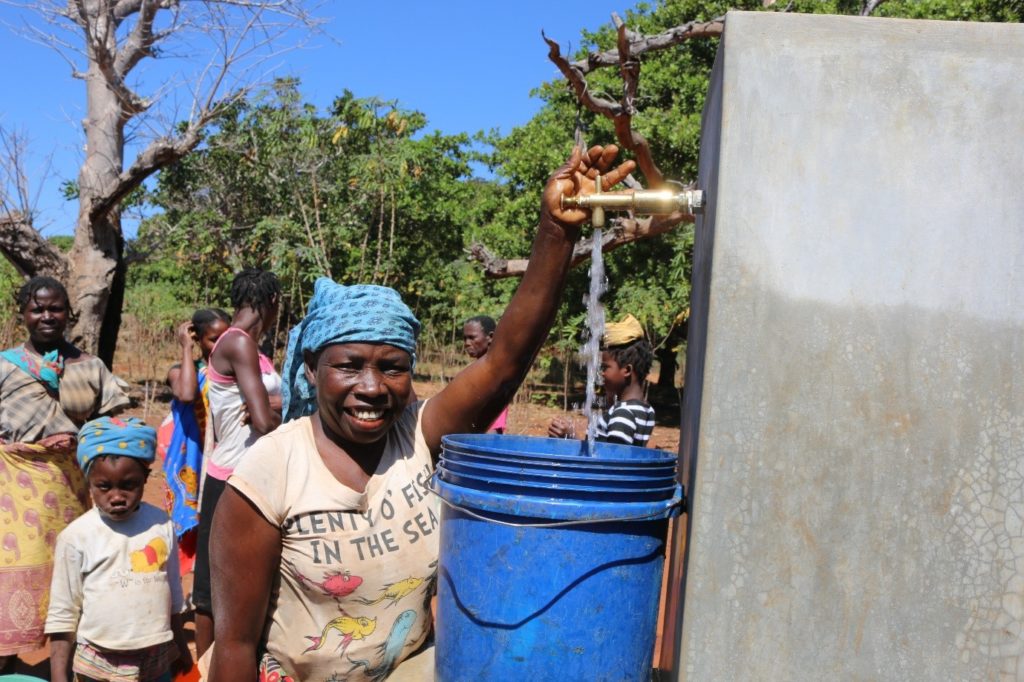 Cecilia collects water from the new solar-powered water system in Tropene, which has a much higher capacity than the old hand-pump. She told us that previously her children had to take time off school because of the lack of clean water. She is very relieved to have clean water so close to her home. Photo: WaterAid/Arao José Valoi

WASH forums are now functioning in both districts. The Memba forum has 27 members, made up of government representatives, community leaders and civil society organisations, and Mossuril has 30. 4 forum meetings have now been held in Memba and 2 in Mossuril.

In Memba, some of the topics covered have been cases of diarrhoea in two communities, water salinity issues in the district as a whole, and high levels of open defecation in in three communities. It was recommended that community leaders actively promote the project’s sanitation and hygiene interventions in order to address this. As of August 2018, water is flowing in Tropene, a community of 3,000 people in the Memba district.

In Mossuril, the group discussed the scarcity of trained mechanics and requested WaterAid’s support in training more.

To address this, the number of boreholes will increase, now planning on two per supply system. This could vary depending on the exact conditions we encounter when we start drilling, and could alternatively involve drilling a wider borehole for some systems, rather than two boreholes.